is developed for applications: 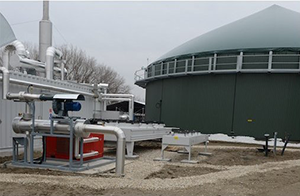 Untreated natural gas containing methane is not so suitable as a fuel to gas engines, because of its minor chemical components, which may eventually damage the internal parts of the engine. ( pistons , injectors , valves , etc ... ) Therefore, in order to avoid increased costs for service or damage to engines, it is advisable to clean the biogas and reduce its moisture content . This avoids engine failure, it maintains the required quality of oil over time, and also it could be expected lower consumption due to higher engine efficiency.

Raw natural gas containing methane gas is saturated with water vapor and traces of contaminated gases, such as hydrogen sulfide ( H2S) and ammonia (NH3) . The water vapor and a portion of unwanted components can be easily removed just in the dehumidifying / condenser unit. When saturation temperature / dewpoint of the biogas, contained water vapor, is exceeded during cooling, then water condenses on the cold surface of the heat exchanger, and is collected in the heat exchanger, and (along with other minor components) is discharged outside of the gas pipe. The method uses a special tube heat exchanger installed in the pipeline, which carries out the cooling of gas by circulation of antifreeze between the heat exchanger and cooler. Then gas can be reheated by energy taken from cooling.

The dehumidifying unit is delevered on the steel frame and includes of main three parts:

Information of some manufacturers of gas engines: